Two hands is better than one | Antreem
Go to blog

Two hands is better than one

In everyday life people easily use both hands in complex tasks, like driving a car or doing a portrait. However, when we try to perform activities on a computer, we usually limit ourselves to using our dominant hand for direct manipulations.

From breakfast to doing sport, drawing up a list of food products to creating a work of art, we naturally use both hands in everyday life. But, when we use technology we lose this habit. Why?

As human beings we are exceptionally good at coordinating both hands for performing complex tasks, but when we interact with computers we often limit ourselves to using only our dominant hand.

According to the Guiard mode, in two-handed actions, the right hand of right-handed people has an “active” role, while their left hand provides postural support.

To successfully use these principles on computers, users must have interfaces available to make two-handed interaction possible. Designers, on the other hand, need to have solid models available to which to refer during the design stage.

Two-handed interactions can be classified as symmetrical / asymmetrical and parallel / serial.

The first studies on two-handed interaction were based on the assumption that users were sitting at their desks interacting through various input peripherals positioned on their desk.

In October 2016 mobile devices overtook desktops for internet access for the first time. 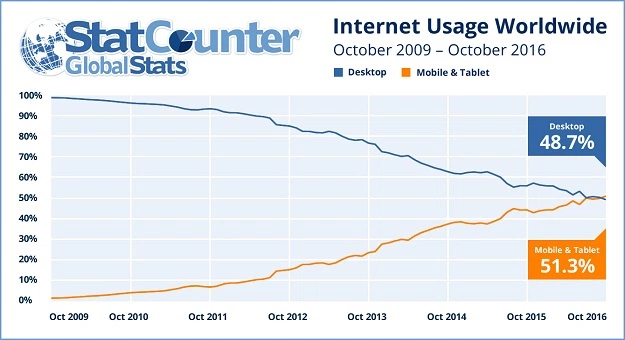 It is interesting to observe how the use of the various devices changes over the hours of the day.

It should be considered that the data provided relates to the US market and is probably influenced by the type of applications offered by the market. 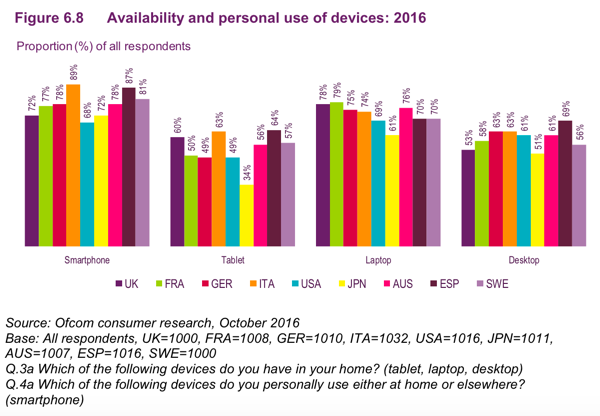 To date, the availability and popularity of touch screen tablets is increasing dramatically with over 30% of internet users owning one. However, the lack of two-handed interaction in touch devices is providing serious challenges for designers.

Designers sustain that tablets use some intuitive interaction techniques, such as pointing and swiping, but also that they cannot support more critical interaction possibilities.  More specifically, tablets are not suitably designed to support two-handed interaction, despite there being sufficient literature to demonstrate that two-handed inputs dramatically increase user satisfaction and performance.

Tablets are a particular challenge for interaction. While small portable devices are designed for one-handed interaction, tablets use software and critical product conventions, extrapolated from computer desktops, such as web browsers.

Conventions do not have to be simply considered as physical constraints. A mouse arrow positioned inside the borders of a monitor is an example of a physical constraint. The user is simply not able to move the arrow with the limits of the screen.

A side sliding bar is an example of a convention, whereas the sliding bar can be limited to the user’s vertical movement. To activate the bar, the user must learn to hold the mouse button down on the bar while moving the mouse vertically. In the same way, even if the physical position and movements of taps are fixed, the user must learn to turn the tap to be able to activate it correctly.

Some clear examples are as follows:

The lack of two-handed interaction in touch screen mobile devices is an area of HCI research that is developing and that has led to the design of various products.

However, to date, no product has been able to live up to the performance of its traditional counterparts.

User Experience and Service Designer. She has a particular interest in artificial intelligence, vocal interfaces and strategic design. Ida guides projects along our design process, where research with users is at the core. When she's not working, every moment is good for traveling or trying her hand at cooking for loved ones and friends.